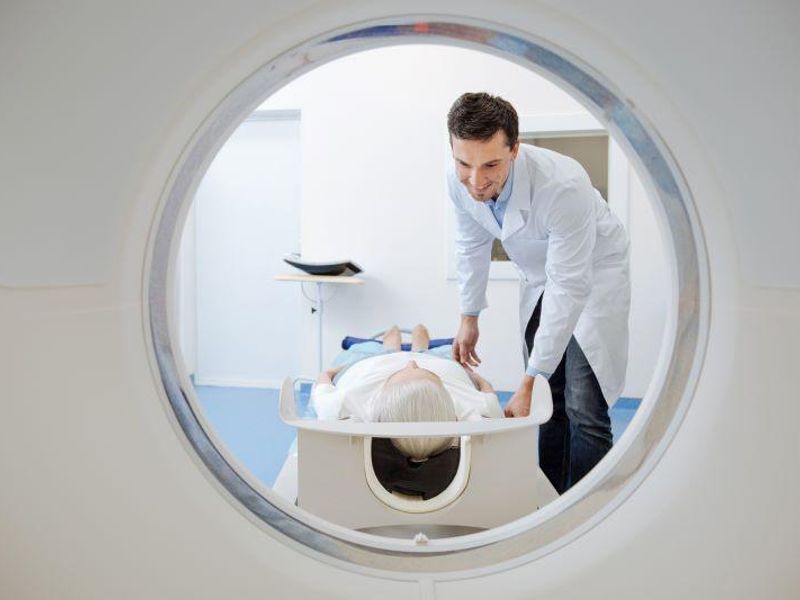 The annual meeting of the Radiological Society of North America was held from Nov. 28 to Dec. 2 in Chicago and attracted more than 19,000 participants from around the world, including radiologists, radiation oncologists, physicists in medicine, radiologic technologists, and other health care professionals. The conference featured scientific papers from a number of subspecialties covering the newest trends in radiological research, as well as education and informatics exhibits.

In one study, Thomas Johnson, M.D., Ph.D., of the University of Rochester Medical Center in New York, and colleagues found that patients suffering from postconcussion syndrome have alterations in the connectivity patterns of their brain’s default mode network.

The authors studied functional connectivity using resting state functional magnetic resonance imaging (fMRI), and analyzed the data using a technique known as independent component analysis, a method that is employed to find patterns in the fMRI data without the bias of a prior hypothesis. The researchers found that patients who experienced postconcussion syndrome had disrupted functional network connections in the brain, and those with more concussions had alterations (even when compared with those with fewer concussions) indicating that accumulating more trauma to the brain may result in more extensive network disruption.

“Unfortunately, this research is not yet applicable to the clinical world as we need to see what long-term outcomes and cognitive deficits these network alterations correlate with, which are the next steps in our research,” Johnson said.

In another study, Clara Weber, of the Yale University School of Medicine in New Haven, Connecticut, and colleagues identified significant microstructural changes in the brain’s white matter among adolescents and young adults with autism spectrum disorder (ASD).

The authors analyzed different age cohorts, ranging from infants to adults. They used diffusion-weighted MRI and imaging programs to calculate certain metrics such as different kinds of diffusivity and the number of connections between two points in the brain. Machine learning classifiers were applied to explore the applicability of certain algorithms. While age-related changes showing white matter maturation were present in all age groups as expected, the researchers could only identify significant alterations associated with ASD in adolescents and young adults (not in younger children).

“We found that microstructural changes appear in adolescence and become more pronounced further into adulthood. This is later than the usual time point of ASD diagnosis (around early school age),” Weber said. “Additionally, we found that age had a high influence on MRI metrics, which needs to be considered when analyzing these images.”

“In our cohort, ICH, encephalitis, ADEM, and vasculitis were more common in Europe compared with the United States. Strokes were more common in the United States, perhaps in part due to increases in comorbidities such as cardiovascular disease, diabetes, and chronic renal failure,” Faro said. “It is important to understand that COVID-19 is a systemic disease, beyond lung disorders, which can cause significant diseases of the brain. Due to significant central nervous system complications, clinicians should have a low threshold to image the brain if a neurologic deficit develops in a COVID-19 patient.”

Jean Jeudy, M.D., of the University of Maryland School of Medicine in Baltimore, and colleagues found that a notable number of college athletes with COVID-19 infection develop myocarditis, and more than half of them present without any symptomatology.

“What was most surprising was that if only relying on symptoms, only five of the 37 cases would have been identified. Cardiac MRI was the modality that was most sensitive in determining subclinical myocarditis. MRI provides the most sensitive evaluation of myocarditis and should be strongly considered in patients with active symptoms,” Jeudy said. “Although MRI screening may not be first-line for asymptomatic individuals, any abnormality noted on supporting testing should raise concern for subclinical changes.”

RSNA: CT Imaging for Cancer Down During COVID-19 Peak in 2020

WEDNESDAY, Nov. 24, 2021 (HealthDay News) — The COVID-19 pandemic had a severe impact on cancer imaging in 2020, and computed tomography for cancer screening and initial workup did not recover to pre-COVID-19 levels through mid-November 2020, according to a study presented at the annual meeting of the Radiological Society of North America, held from Nov. 28 to Dec. 2 in Chicago.

TUESDAY, Nov. 23, 2021 (HealthDay News) — Levonorgestrel-releasing intrauterine contraceptive devices seem to have systemic effects on the body, resulting in increased background enhancement on breast magnetic resonance imaging, according to a study presented at the annual meeting of the Radiological Society of North America, held from Nov. 28 to Dec. 2 in Chicago.